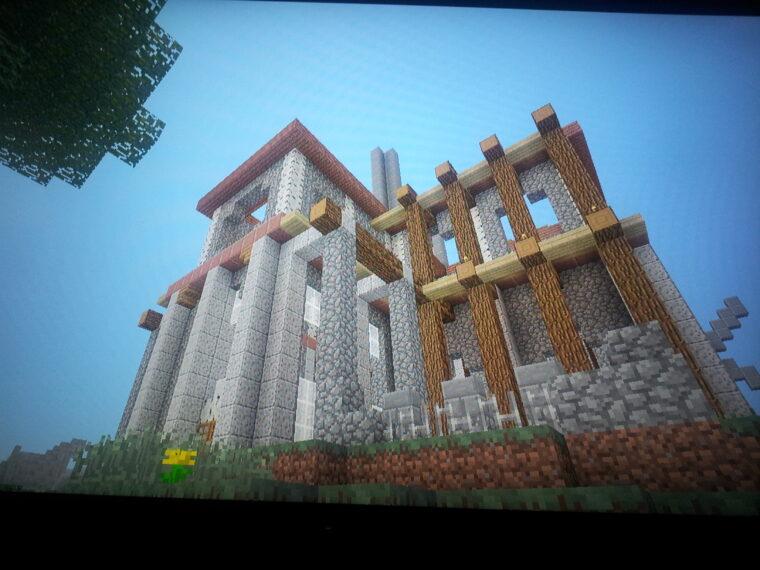 Another small creative project on PS3 Minecraft, in survival mode! Done in the same world as the previous Halloween build. This is a cathedral I am slowly building up layer by layer (currently, the roof and tower are not yet done). The build is around 20 blocks tall and set on top of a hillside. It is lit very well, not just to stop mobs spawning, but because it is an important sacred object, and the largest “landmark” build in the survival world.

I’m building from imagination, but we’ve all seen cathedrals before, so that’s fine. The first part of the cathedral is around 10 blocks tall and made from diorite and cobble. A second smaller layer is on top of that, from birch wood and cobble (to cut time and costs). Each wall is lined with windows, and I will soon be putting colored glass panes in them.

The roof will be from dark oak (not planks), as I have plenty and there’s a dark oak forest nearby. It should look good, but will need extra lighting to stop mob spawns on the roof. The cathedral is on a cross shaped floor plan (with 3 doorways, one at each end) and will have a short tower at the center – WORK IN PROGRESS.

And while it may not seem like it, every single part of the cathedral is (I hope) carefully considered! Down to the position of each torch. Since this is a sacred object, I wanted to add some kind of special geometry to the build.

EDIT – fun fact: the circular windows above the doorways perfectly frame the sun and moon at certain times of the day, adding that special touch! — I hope these posts on my builds and build methods interest or inspire you.