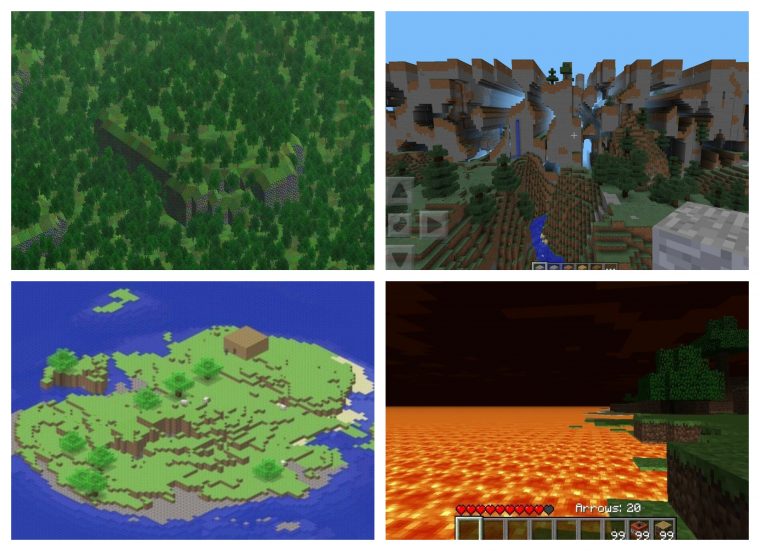 The sky dimension was an early planned heavenly dimension, the opposite of the Nether. In Indev, there was a map type that generated floating islands, but the dimension was never added. Apparently, you would “go to bed [and] there is a certain chance that you get dragged into the dream world instead.”

You can add the sky dimension with mods.

A lost version of Indev (v.0.31) featured the “hell” world type, which reduced brightness, turned water into lava and populated the world with mushrooms. This experiment would obviously go on to become a seperate dimension accessible through a portal – the Nether.

You can add hell mode with mods.

This is an unreleased prototype game by Notch. It was developed in 2008 and inspired Minecraft. While MineCraft is about Mining and Crafting, Ruby Dung was meant to be a Dungeon game in the Rubylands.

There is an infinite number of possible worlds you can generate, each with a slightly different set of options. And a near-infinite amount of these have never been generated. The AMPLIFIED world generation option causes your world to go to extreme polar opposites of the tallest mountains and deepest caverns.

The BUFFET is a world type that creates a never ending wasteland – a single biome for the whole world. This includes the ability to generate an end or nether-themed Overworld! SUPERFLAT worlds offer something similar, allowing you to customize, add and remove the world layers. Just don’t make it all TNT.

“This feature was present in the game but was removed. In indev versions of the game you could take an isometric screenshot by pressing F7. The isometric view is an overview of the world from a top corner, it has nothing to do with the bird’s eye view.”

This infamous glitch existed from the time infinite worlds were added until Beta 1.7.3. While Minecraft worlds are infinite, the terrain generation breaks down millions of blocks out from spawn. At 12,550,821 blocks out, the massively laggy world would break completely, turning into copy-paste strips of land.

You can add the far lands back with mods.

The 1.19 wild update added ancient cities. These not only raise more question about the lore of Minecrafts lost civilizations (who created the temples and other structures), but add the Warden monument. This monument stands at the center of the ancient cities and strangely resembles… a portal. No plans for any upcoming dimension were announced, but it is something for modders to add for sure.

In the first versions of Minecraft, multiple unique structures existed for a brief period of time. During Indev (in development), the famous INDEV HOUSE greeted newely spawned players. It was a small wood and cobble structure that contained chests with every item available ingame at the time.

In the first Infdev (infinite development – added infinite worlds) version, there were two OBSIDIAN WALLS running along the X=0 and Z=0 axis of the world. They were replaced by the co-ordinates system.

When bricks were first added in Infdev, they were unobtainable naturally as clay didn’t exist. To fix this, massive BRICK PYRAMIDS were added, which would rarely be found far away from the worlds spawn point. They had a 64×64 base at Y=0 and reached close to world limit. They were *completely filled* inside and not hollow, giving the player a massive amount of bricks if they bothered to mine every block.