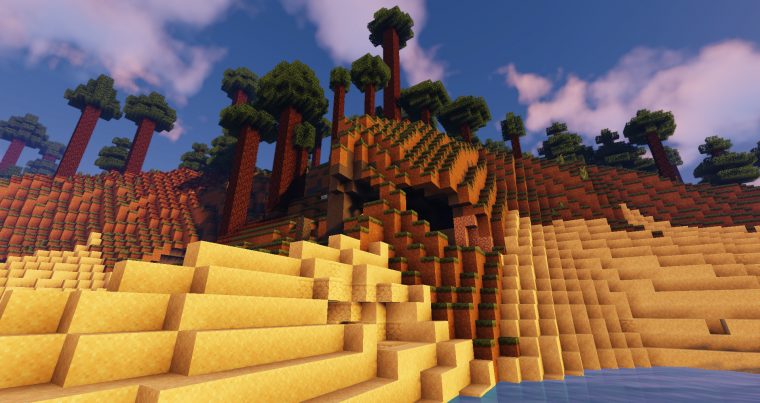 Want to take a few screenshots of your latest build? Show your skills to the world? Well, you not only have to make the build, but also the screenshots good! A good picture can catch someone’s eye and make it more likely for them to check out your build, so always try to follow these few simple tips below, and you’ll be a professional builder AND photographer in to time..!

Whenever you’re new to Minecraft or not, the following can improve your screenshots massively: Make sure your hotbar and chat are hidden when taking screenshots by clicking F1. Always pick the angle or perspective that’s best suited for your build. For example, stand right at the foot of a skyscraper, looking up, when taking a screenshot of it to make it seem big and looming over you.

Wait for the perfect weather and time for your screenshot (or use commands if in creative). This can change the way a build looks and feels – eg. adding thunder in the background of a dark mansion can make it feel dark, mysterious. You could also mess around with the video settings, where you can eg. change the cloud height or completely remove clouds if they interfere with your build.

As well as that, always check your surroundings! If, for example, even one chunk doesn’t load in the background, it can ruin an otherwise perfect screenshot. You might also want to remove any mobs around your build, as who would want a sheep wandering about the streets of their town? ?

This basically means ”Where things are in relation to one another”, and it can affect how good a screenshot looks. Never just put something in the middle, take a screenshot and call it done. It just doesn’t work.

Experiment till you get the right proportions – they can change the builds size, amount of detail visible, and a few other things. Try to, for example, have things in the background and foreground or on both left and right, as opposed to just in the centre. Proportions can also be used to make some areas of the build stand out more than others, and if you get them right, can completely change how your build looks in the screenshot.

Using a texturepack can make a build better and more detailed, as long as you pick the right one. They can completely change a blocks texture, because who said that a brewing stand cannot be a traffic cone? For example, if you have a castle, try finding a nice medieval texturepack with plenty of details to spice up your build. But this, of course, is optional.

Shaders might or might not make your build better, but they will for sure change it. They mainly change the way the water, sky and glass look, as well as make the lightning and shadows more realistic. Those things can transform a build as long as you take the photo from the right angle, using the right shaders. This too is optional, but useful.

To make your screenshots more appealing you can do quite a few things. The first is to edit your screenshots to change the way the build looks and feels. This can be done with a simple editing software such as Gimp, and can improve a screenshot by, for example.

Increasing contrast, adding some writing – such as your build’s name – or making some areas of the build stand out more than others. Another thing you could do is add your or your build team’s name/logo in the corner. This is a nice finishing touch and way to advertise yourself, while making things harder for the potential build thief (bonus!).

Alternatively, you could scratch the idea of taking screenshots in-game altogether, and instead use software such as Chunky to take pictures of certain chunks or whole maps and edit them using the options and filters there. This does require more effort (and a few YouTube tutorials!), but it is worth it. I’d personally stick with in-game screenshots though, as it’s quicker and easier – but it’s up to you which method you choose.

I hope this was helpful, whenever you’re a beginner or not! Simple things like those can improve your screenshots and spice up the builds in them. Next time you take a screenshot, remember just how easy it is for a tiny mistake to spoil a giant build!

1 thought on “Tips to improve your screenshots”