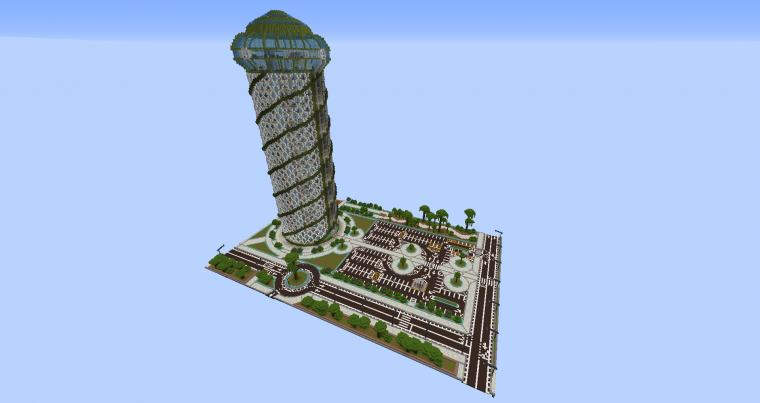 Sometime in 2017 I’ve built a small circular skyscraper with green terracotta and blue glass, a spiral design, and a car park out front. It was small and cute. Now it’s time to step things up. With 5 years of building experience and advanced knowledge of World Edit, I present to you: Spiral Dreams skyscraper 2.0 (with full interior)!

The original build was lost, and only 5 screenshots remain that I used for the comparison pictures below. I decided to keep the original name of the skyscraper – Spiral Dreams – which means nothing but sounds cool, I guess. The old skyscraper was built on Minecraft 1.8 and was made mostly by hand – I only copy pasted the floors. The new skyscraper was built on the Builder’s Refuge server on 1.16.5 with heavy use of commands. More details below.

The tower is symmetrical and has a strip of glass with doors on the ground floor on both sides.

I laid down the circular foundations of the tower using the CYL and HCYL commands. The tower is a cylinder of glass surrounded by a grid pattern. I built the grid pattern by hand and stacked it up with //STACK. The tower is further surrounded by a line (the namesake spiral) curving around the tower. That caused some issues when I was adding floors.

The next paragraph describes the issue but it’s complex so you can skip it.

I created and furnished an interior. The 2017 tower only had space for a spiral staircase inside. The 2022 tower was massive – I added a spiral staircase at the center, then floors around it, leaving a void inbetween. Small walkways connect each floor to the stairs. Each floor has 10 rooms, 2 “M” toilets and 2 “F” toilets.

Once the main interior and exterior were done, I moved on to lobby, rooftop and surroundings of the tower.

The rooftop is a squashed sphere or UFO. I used the HCYL command to get the basic shape of the UFO in place. I connected the circles with the LINE command to form the whole UFO. This way I completed a quarter of the UFO, then used the COPY and ROTATE commands to easily finish the other 3/4. There are 4 balconies on the rooftop, one on each side. Inside the UFO, I furnished the large auditorium/viewing deck area with bars, chairs and pool tables.

Up until this point I kept a column of blocks at the center of the tower to guide me. For example, I could take out 2 blocks from this column to stand inside it, and do the HCYL circle generation from the center.

I furnished a basic lobby on the ground floor, with a reception desk, chairs, fountains and greenery. Next and last was the surroundings of the tower. Again, I kept the same layout as the 2017 tower, but made everything MUCH grander. A straight path leads to the main entrance. There is a car park for 100+ cars, with details like restricted parking spaces, a guard booth and entrance barriers. There’s also a tiny staff-only car park at the back, all in yellow lines! There are a few roads and a roundabout.

The roads are 1 block below the paths and greenery. When making the paths and greenery I used colored wool at first to make things easier to see. Once I was happy with the design I could use the REPLACE command on the colored wool. Lastly I went around planting oak, birch, rainforest and dark oak trees. I didn’t add cars because too lazy (this thing is massive!), and because the 2017 tower didn’t have them.