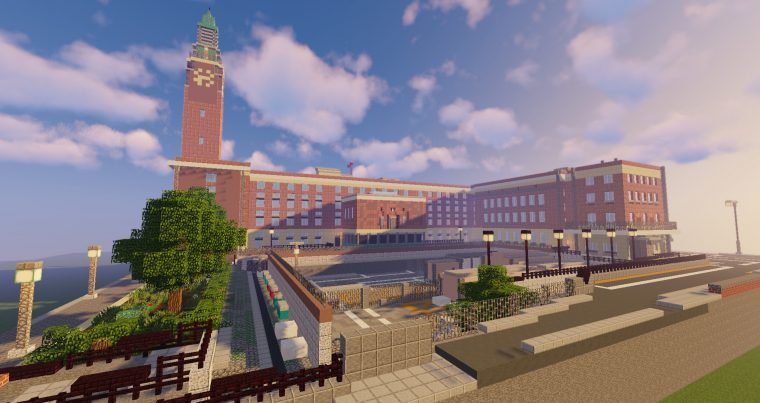 This build is a near-exact recreation of the City Hall in Norwich, UK by me! The Hall is an art deco building completed in 1938, opened by King George VI and Queen Elizabeth. Its design was chosen through competition and its balcony is claimed to be the longest in the UK. The building is grade II listed and was unharmed during WW2.

Image above: Front and back comparison of the hall. Top photo by Mike Page, bottom by John Fielding.

I used Google Maps as well as online and own photography to replicate the building as close to real life as possible. The scale is relatively large, with each floor of the hall being 4 to 6 blocks high. The whole building measures 140×140 blocks. Interiors are blacked out with gray wool.

I started building from the front entrance, and used windows as a guide to scaling the building. Once the first floor of the front was done, I slowly expanded outwards by roughly planning the ground layout with wool.

The hall was built through gradual layering and improvement. I filled in blank walls, then added windows and details and kept changing and refining parts until I was satisfied… Sometimes this meant moving whole chunks of the building to prevent things looking out of scale.

Windows use white glass panes, though most also have a layer of slabs or walls on the top or bottom to create realistic detail (window grids). Doors are either from wood or gray wool. Actual Minecraft doors would be way too small. The surroundings of Norwich City Hall are also accurate, down to the tilt of the landscape and markings you see on the road! I didn’t bother adding in cars though.

The hall was built over 3 days, and I’ve had to constantly switch between the game and browser to maintain accuracy. And that about sums it up, so enjoy the nice pictures – and check out the blog for more upcoming projects! And while I saw nothing like this done before from Norwich, shoutout to the few and far-flung attempts at Carrow Road Stadium: https://www.google.com/search?client=firefox-b-d&q=carrow+road+minecraft

Image above: Some of my own reference photography in comparison with the end result in-game.