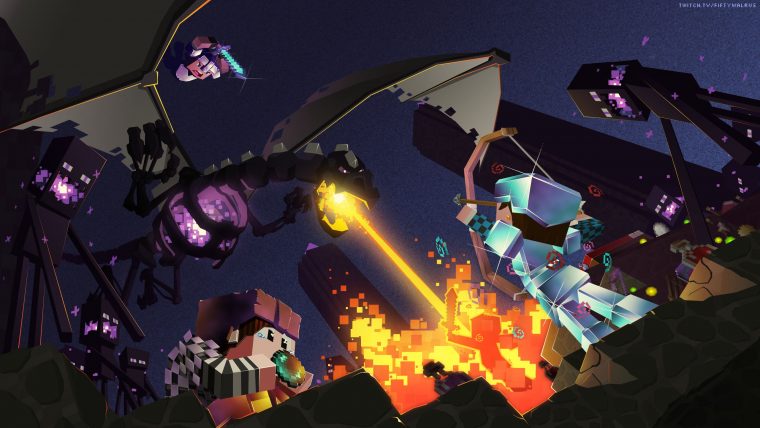 If you have diamonds, it’s time to grind for the netherite upgrade. But even full armor, tools and weapons, are a sub-goal, temporary, and only a means to an end. All armor is expendable and will eventually run out of health, fall into the nether lava lakes (not an issue with netherite), or get lost to the end void…

This end to the Minecraft lands is unreachable without cheats or mods, being 30 million blocks out in each direction. Yet even then, you can see that glitched terrain keeps generating past this apparent “worlds end”. And with cheats or mods, you can choose to go past this border until you lag out. It is not an end.

Fact from the Minecraft Wiki: “One player known as KilloCrazyMan is known to have walked to the Far Lands in vanilla Minecraft beginning the journey in September 2019 and reaching them nine months later in June 2020. Upon arrival, a USD$10,000 donation was awarded to him by Notch for his efforts.”

This was in Beta 1.7.3 when the world border was small and the famous far lands existed.

The ender dragon fight is followed by the end credits, but it is not a definite end. Normal gameplay can continue after the dragon fight, and the dragon can be respawned again and again with end crystals. Also, exploring the outer end islands yields great prizes (shulkers, armor etc.) but is optional. It is not an end.

Advancements are like milestones to track your progress, the things you explore and find. Completing every advancement, including the few HIDDEN ones, might be an end! But like in every game, these advancements don’t end the gameplay, and you can continue playing regardless of how many you unlocked.

Check the wiki for a list: Advancement – Minecraft Wiki (fandom.com)

If we’re being technical, then many items aren’t unlockable in survival, such as command blocks, bedrock, barrier blocks, spawners, spawn eggs… BUT if you do manage to gather every single block, item, mob and enchantment that’s obtainable in survival, that might be an end! You have gathered everything that makes up the game.

Minecraft is a SANDBOX. Whether in survival or creative, one of the only things you can do is to let your imagination run wild building all kinds of things. It’s not an end goal, but one of the many things you can choose to do. There will always be something new, bigger and better, to build. And in a way, even buildings are temporary.

THE END IS WHERE YOU CHOOSE IT TO BE.

1 thought on “Minecraft: ALL ENDINGS. There is no end.”