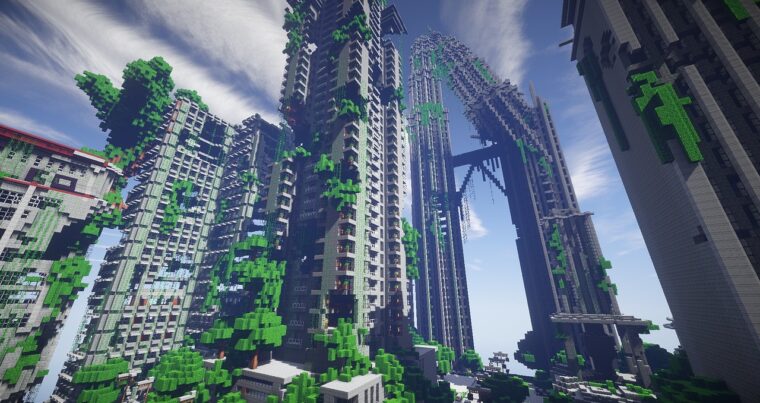 This epic post apocalyptic city is found all over the web as a “stock” image, and doesn’t fail to impress. I could not find the original creator, however I’ll attach some related links at the end.

A modern city that has met its fate – crumbling hollow buildings rise out of the abandoned streets. Vines and bushes have overgrown everything. There is a replica of Petronas Towers, with one tower broken in half and leaning dynamically on its other half. Comparing to the real Petronal Towers and surroundings, this city could be based off Kuala Lumpur in Malaysa. Copy-paste apartment blocks stand empty like great walls. The town is complete with a huge, somewhat out of place, cathedral.

The whole map was originally a survival games map, and the buildings surround a large park with a survival games spawn area. A fitting setting for this minigame, though the town could not survive! The park is the centerpiece, and a river flows nearby. The city is surrounded by cliffs, and only bleak stone is used for everything from walls to roads, giving an eerie feel to the place.