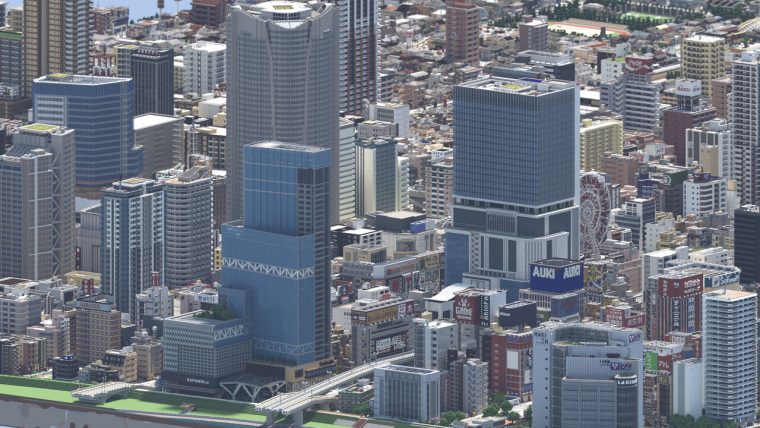 It’s not hard to see why this build was featured! This “japanese modern city world” has been in the making for nearly a year by a dedicated team of unknown size. Or rather, ONLY a year, because it is absolutely huge!

The sprawling city scape is extremely life like in every aspect, from roads to buildings, bridges and everything in between. There are all types of structures, from low rise homes and apartments to the occasional glass tower. Large infra structure connects the buildings. Bridges span the river, and car parks use up every inch of free space.

Unlike many Minecraft cities, this one manages to break the square grid pattern of roads. Organic highways snake through the buildings, while the buildings themselves feature many curves and interesting designs.

At ground level, the streets have not been left out, with plenty of small scale detail for you to enjoy while exploring! Curved pedestrian walk ways, glowing bill boards and signs, green spaces, bins, street lights and more. The town also boasts a large Ferris wheel and stadium!

For a city of its size though, there’s a severe lack of cars on the roads. Only some parking spots are filled. But, that is a small price to pay considering the scale of the whole project. More cars may be added in future updates, as the town is a constant work in progress.

It is available for download at the Planet Minecraft page (link at the top of this post). The project uses an optional texture pack, however the city should look just as impressive without it!